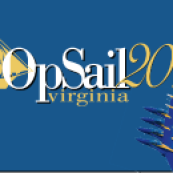 From June 1 -12, 2012, the Port of Virginia will once again host an impressive fleet of tall ships, navy and military war ships representing the world. OpSail 2012 Virginia is planned to illuminate the community with spectacle and festivity, and will place our Commonwealth front and center on the world stage.

The goals of OpSail and the 1812 commemoration events are planned to promote goodwill among nations, inspire patriotism and foster interest in American maritime history and heritage, while creating unique educational opportunities for young and old alike and bringing economic and social benefit to our communities.

In June 2012, Virginia will host OpSail 2012 and the Commemoration of the War of 1812 and the Star Spangled Banner, leaving its spectacular signature on this generation and reinforcing the Port of Virginia's rightful place as one of the greatest ports in the world.

OpSail 2012 Virginia is managed by Norfolk Festevents, Ltd., based in Norfolk, VA.

RSVP for OpSail 2012 to add comments!