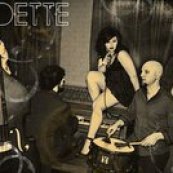 As always, VBNightlife has you covered for Friday night! This week's live music is courtesy of VEDETTE! Come on in and chill with the VBNightlife crew and the awesome staff at Taphouse!

Remember: It's $5 Martinis for the ladies (lots of different flavors!) and $2 special drafts!

From a collective love of old School, timless grooves, and modern hits comes Vedette, a band that combines these elements into an entertaining and captivating show that will make you want to get up and move. Formed in 2008 at Soul Haven Studios in Virginia Beach, Vedette was founded on a deep love for the classic sounds of Motown to 80's and 90's R&B nostalgia. Fronted by the sultry and soulful vocals of Rianna Pellino, a front woman who certainly commands your attention and exemplifies the band 's French namesake. The band is driven by the unmistakable southern-fried groove machine that is Jim Kolacek on drums and Nick “Levi” Pulaski on Bass. Anchoring the band's sound is the Gospel inspired piano of Jamie Lewis, that will take you from the church pew to the dance floor. The band is rounded by the jazzy yet edgy sound of Geoff Logan on guitar. Vedette's hard groovin style surpasses your usual bar fare, venturing into songs that the musicians love and listeners connect with. So put your dancin' shoes on and be ready for some grown and sexy soul infusion…Vedette is in the house!