75th Anniversary Celebration of the Back Bay National Wildlife Refuge

IF YOU HAVE never visited Back Bay National Wildlife Refuge, Saturday will be a great day to get to know this treasure at the south end of Sandbridge.

This welcoming haven for wintering waterfowl is throwing down the welcome mat for humans Saturday to celebrate the refuge's 75th anniversary.

You are invited to visit and participate in all sorts of activities that will introduce you to the land and waters of this protected spot and tell you a little about its history.

There will be no refuge entrance fee that day and all activities are free, including a tram tour at 1 p.m. that will take you through the refuge down to False Cape State Park and back.

So head down with your camera as early as 7:30 a.m. for a guided bird walk, if you like. The opening ceremony is at 9 a.m. Then visitors can hike around one of the impoundments that is managed for wildlife and not only look for wading birds and other critters but stop at various stations set up along the walk to learn about refuge history, decade by decade.

You will learn that the refuge, established in 1938 to protect wintering waterfowl, has grown over the years from 4,600 acres to 9,200 acres. You will find out that the refuge once had no sand dunes and how the dunes came to be, among other interesting tidbits.

You might even hear the "clack, clack, clacking" call of the king rail or see this secretive marsh bird, as Steve Coari did on a Memorial Day visit. Coari, a Virginia Beach Audubon Society member, took this photo (at left) of the rail, one of a pair he saw that day.

Coari also saw many other birds, including a flock of cedar waxwings, a prairie warbler, easterntowhee, yellow warblers, kingbirds and great-crested flycatchers.

This time of year at Back Bay, song birds, wading birds and shore birds take over from the snow geese, tundra swan and other waterfowl that winter at the refuge.

But birds are not all you will see on this fertile, sandy spit of marshland, maritime forest and beaches with the Atlantic Ocean and Back Bay on either side. If you take the tram tour, there's a chance you could see one of the feral pigs in the marsh along the way or a shy deer, coyote or fox. You are sure to see turtles sunning on logs. The venomous cottonmouth moccasin, king of the snakes at Back Bay, also might be seen sunning alongside a trail.

You might want to strike out on your own along the Bay Trail, a short boardwalk trail near the refuge visitor center that winds through a tunnel of grasses, cypress trees and wax myrtles. You can see deer trails through the marshes and maybe a footprint on the trail, yellow-rumped warblers in the trees and maybe water snakes in the pond.

Other activities during the day include saltwater fishing and kayak demonstrations and exhibits by wildlife rehabilitators and environmental groups. The Virginia Aquarium and Marine Science Center will release a rehabbed sea turtle at 11 a.m.

As you drive down the entrance road, keep your eyes peeled for the osprey nest on one of the power poles. You may see dad fly in with a fish for his young chicks. The osprey can fish for his family from both the ocean and Back Bay, which is one of many reasons wildlife has thrived for 75 years at this special place. 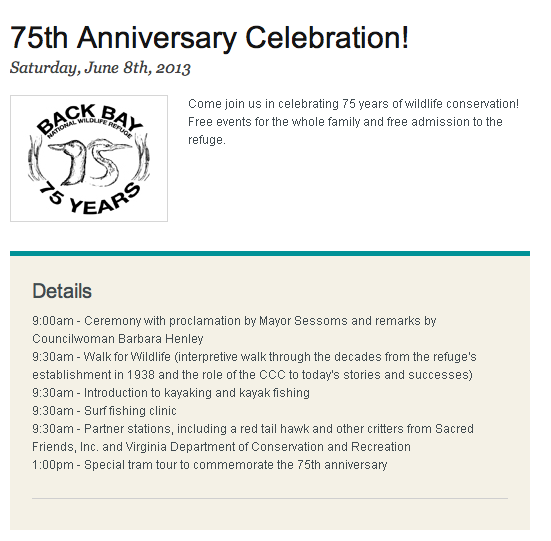 RSVP for 75th Anniversary Celebration of the Back Bay National Wildlife Refuge to add comments!