**WIN 2 Tickets to Wes Moore at the Sandler Center 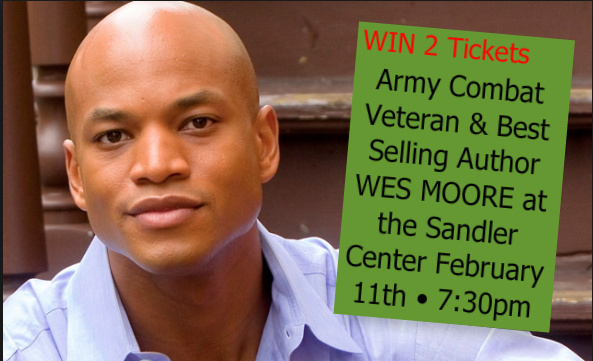 WIN 2 Tickets to Wes Moore at the Sandler Center February 11th at 7:30pm (see below for details on Wes Moore)

To enter, Download the app using one of the buttons below and hit the "Win Stuff" button to enter:

Or Search VBnightlife in the app stores to download the app

If you have already downloaded our app, you can enter the contest by emailing contest@vbnightlife.com with the subject line WIN WES

Winner will be notified Thursday January 29th at Noon

Wes Moore is a youth advocate, Army combat veteran, social entrepreneur, and host of Beyond Belief on the Oprah Winfrey Network. His first book, The Other Wes Moore, became an instant New York Times and Wall Street Journal bestseller.

Despite early academic and behavioral struggles, Wes graduated from Valley Forge Military College in 1998 and Johns Hopkins University in 2001, where he also played football and earned a bachelor’s degree in International Relations. He then became a Rhodes Scholar, studying International Relations at Oxford University. Following his studies, Wes was a paratrooper and Captain in the United States Army, serving in Afghanistan and then served as a White House fellow to Secretary of State Condoleezza Rice.

Moore is the founder of STAND!, an organization that works with Baltimore youth involved in the criminal justice system. He is committed to helping the parents, teachers, mentors, and advocates who serve our nation’s youth.

TICKETS ARE $53.50 (INCLUDING FEES) AND CAN BE PURCHASED HERE: http://ev8.evenue.net/cgi-bin/ncommerce3/SEGetEventInfo?ticketCode=GS%3ASC%3ASC15%3AVBFMOORE%3A&linkID=global-sandler&shopperContext=&pc=&caller=&appCode=&groupCode=SVBF&cgc=

RSVP for **WIN 2 Tickets to Wes Moore at the Sandler Center to add comments!