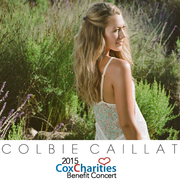 Join us this Friday May 15 at Chrylser Hall to see Colbie Caillat in a live Benefit for Cox Charities. COX Charities supports youth education & technology in our local communities.

Get your tickets to see Colbie Caillat at the annual Cox Charities Benefit Concert: http://bit.ly/1DprTIi

Colbie Caillat is an American pop singer-songwriter and acoustic guitarist from Malibu, California. She debuted in 2007 with hit singles "Bubbly" and "Realize". In 2008, she recorded a duet with Jason Mraz, "Lucky", which won a Grammy. Caillat released her second album, Breakthrough, in August 2009. Breakthrough was nominated for Best Pop Vocal Album at the 2010 Grammy Awards. She was also part of the group that won Album of the Year at the 2010 Grammys for her background vocals and writing on Taylor Swift's Fearless album.

Caillat has sold over 6 million albums worldwide and over 10 million singles. In 2009, she was named Billboard magazine's 94th-best-selling music artist of the 2000–2009 decade.[1] In 2011, she released her third studio album, All of You. On October 23, 2012 she released her first Christmas album, Christmas in the Sand.

Help us support youth & education in Virginia and enjoy an awesome performance by a very talented singer/ songwriter.

Watch a video of Colbie Caillat singing "I Never Told You" here: http://www.youtube.com/watch?v=_YtzsUdSC_I